Look for the Helpers 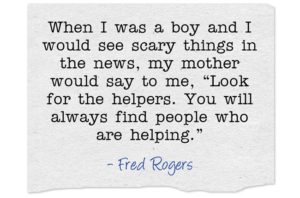 My first childhood crush was Fred Rogers. That’s right, Mr. Rogers of Mr. Rogers’ Neighborhood.  “Bring him back,” I’d beg my mother, once his face faded from the television screen. His gentleness and decency appealed to me, along with millions of other children.

Almost fifty years later, I find myself turning to the wisdom of Fred Rogers again.

It’s an understatement to say these last months have been hard. I was still struggling with outrage and grief from the events in Charlottesville when Harvey, and then Irma, made landfall, devastating Texas, the Caribbean, and Florida, among other U.S. states and territories. If you go west, Oregon, Washington, California, Idaho, Montana, and Wyoming have been overcome by wildfires. Mexico got hit with an 8.1 earthquake. There’s extreme, widespread flooding in India, Bangladesh, and Nepal. As I write this blog, two more hurricanes have reared their ugly heads. Max made landfall close to Acapulco and Jose threatens the Atlantic Coast of the U.S.

These are only a fraction of the losses citizens of the world face from catastrophes, social and political events, and war. Millions across the globe have suffered. It will take years for families to mourn, rebuild, and settle in their new lives. Suffering is nothing new, but it’s sad that compassion for others often comes only after suffering a similar loss.

While there’s been an outpouring of love, I’ve also seen anger and indifference. If you’re on Facebook or Twitter, you’re aware of the comments — about which victims deserve to be helped or rescued first, or the motives of those offering free services, or who is wasting time or doing too little. The root of anger is usually fear, in this case I’d guess of a world spinning out of control. These feelings are understandable, but I haven’t found fear or anger to be helpful until I convert those emotions into action.

Love and help, in the face of anger and indifference

When we are overwhelmed, we sometimes turn away from suffering. In the face of catastrophic loss, we say: It’s too big. I can’t make a difference.

Nothing could be further from the truth. Every dollar donated to a food bank or charity helps. Volunteering helps. Sharing information about services over social media helps. The key is to help in whatever way we can. The media coverage will slow and eventually cease, but the need will continue. Those suffering usually don’t have time to ask for help. They’re too busy on day-to-day survival.

When we turn away from suffering, we disconnect from our humanity. So when I get overwhelmed or feel like I’m succumbing to anger and fear, I need to remind myself to make like Mr. Rogers. Look for the helpers. Emulate them. Then do what I can.

The rest of this blog is devoted to articles about helpers and ways to help. If you have comments or additional links to add, I’d love to add them! Please leave them in the Comments section below.

Everyone needs a friend who they probably shouldn't be allowed to sit next to at a serious function.