Kicking Fear to the Curb

This blog isn’t about the gun debate, although it mentions guns. This blog is about fear. Fear is eating away at the foundation of our lives. We need to start kicking it to the curb instead of bowing to it. 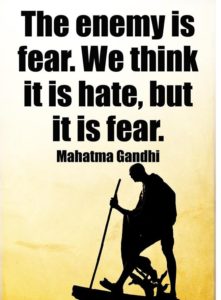 We woke to a nightmare yesterday. Another mass shooting, this time in Las Vegas, which has taken 59 lives so far and injured more than 500 others. If you watch the news, you have the details — the perpetrator, the number of assault rifles he had in his hotel room, the ammunition. The grief is overwhelming.

In reaction, some Americans will run to gun shops to arm up and protect themselves from perpetrators and a government they fear will strip their Second Amendment rights. Others will push for gun reform, because more assault weapons will only beget more killing, and they can’t abide another innocent life lost.

We each argue our side until we’re out of breath, angry, and in despair. Until we’re screaming so loudly no one can listen. I get it, because I have very strong feelings about guns. What we don’t talk about, though, or admit to ourselves, is we’ve bought into the culture of fear.

The world is going to hell, many elected officials say. Be afraid of your neighbors, the shop owner on the corner, your teacher, your priest, your (fill in the blank). Yes, evil exists. Injustice too. But when we question the goodness in everyone, it strips us of humanity. Eventually, we forget the good in ourselves.

This downward spiral we’re on must stop. Yes, some people perpetrate acts of evil, but there are more good people than bad, more acts of kindness than rage. The response to the shooting proves this. Think of the people lined up to give blood, or the heroes who shielded others, grabbed their hands, pushed them over fences, and applied tourniquets while the shooter was still active.

So just make the shift. Should be easy, right?

Nope. It’s hard to do. I know. We’re all feeling bruised. By mid-afternoon yesterday, I’d worked myself into a frazzle, thinking crazy gunmen were lurking everywhere. People are angry, fighting all the time. No one is safe anymore, anywhere. In an act of perverse defiance, I packed up my laptop and went to Starbucks. I was twitchy on the ride over, though, because of the thought that crossed my mind, even if for only a second: Could a gunman show up at the Starbucks on Park Lane and Chandler? Maybe.

Since I’m writing a blog this morning, there was obviously no gunman at Starbucks. The crowd was thin for a Monday afternoon, but most folks were on their laptops or chatting, minding their own business, as usual.

With one gorgeous exception.

As soon as I got my coffee, a man in his mid-20s came in. He sat at the center table and began unpacking his laptop and a bunch of board games. Curious. Five minutes later, a young girl and her mother entered. The girl skipped over to him and chatted nonstop about her day. He listened patiently, and then they got down to work. After a few minutes, it was obvious he was her tutor. It was easy to see how much fun the little girl was having, and they were loud at times. She was a ball of energy, often shrieking with laughter. But there were no dirty looks directed toward them yesterday, as there typically are with louder patrons. Instead, we smiled and sent each other looks of relief, because people were being kind to one another. It was a return to normalcy. A break from the madness.

After the lesson, I thought about how this student and her tutor might have found each other, and what the rest of their week would be like. Since the little girl had so much extra energy and needed help, it’s very possible she’s been bullied or called “stupid” enough times to take the joy out of school. Since her tutor was African American, it’s very possible he’s endured prejudice and been called the N-word enough times to prompt despair. But for that hour at Starbucks, there was only gentleness, acceptance, affection, and humor. Exactly the humanity we need to look for in each other.

So what can we do?

This would be a good start:

So what if I’m wrong?

It’s possible. Maybe the world is going to hell and we’re all destined to go up in a gigantic ball of flame. Perhaps I’ll meet my maker at the end of a madman’s gun.  Even if that’s the case, I don’t want to waste a single minute of my life in anger, or cowering in fear, or worse, hating another human being.

Life is beautiful and too precious to waste. Yes, we should fight for the issues we’re passionate about. We should always lobby for justice and for what we know in our hearts is right. But we won’t help anyone if we let the fight take joy from our lives. And we won’t convince others to listen if we’re dismissive, bitter, or sarcastic. Make the effort to be thoughtful and kind. Make the effort to see the fear in others (as it might mirror yours), along with the goodness. But don’t surrender to fear. Kick it to the curb instead.

As always, if you have a moment, I’d love to hear your thoughts in the comments below.

Everyone needs a friend who they probably shouldn't be allowed to sit next to at a serious function.