Why Victim-Blaming Hurts Us All

When the Harvey Weinstein allegations surfaced earlier this month, it was as if a dam had burst. I watched the news carefully for days, wondering if interest in the story would wane. Our society has a short attention span.

Additional victims have come forward since then, naming Weinstein and others. So perhaps the issue has finally reached critical mass. I sure hope so; we need to expose this problem to the light. Sexual harassment is nothing new. It happens every day — in restaurants, schools, gyms, churches, and retail stores; in small companies and large corporations; and in the military and other government institutions. In short, everywhere.

We need to stop blaming the victims

I’ve seen so much victim-blaming in articles, interviews, and social media. It’s disheartening, because it means many of us don’t grasp the nature/scope of the problem.

Blaming the victim amounts to a slap in the face, because it persecutes the victim instead of placing blame where it belongs: On the offender.  Victim-blaming only reinforces a perpetrator’s power.

When we blame or shame victims for speaking up (or not speaking up quickly enough), we ensure future silence. The sense of shame only grows. It’s common for victims to take on the shame of their perpetrators, anyway. (What did I say to give him the wrong idea? Did I smile too much? Should I have taken work home instead of staying late?)  It takes time for many to find the courage to speak. And the more powerful the perpetrator is, the harder it can be to speak up. Make no mistake, we worship power in our society. We put power-mongers on pedestals, conveniently forgetting how corrosive absolute power is.

All the more reason, then, for each of us to examine our core beliefs and the thoughts running through our heads. When we think “she was begging for it,” what are we really saying about the nature of women? Are we reducing women to opportunistic sluts? When we think “he just couldn’t control himself,” what are we saying about men? Are we reducing men to mindless animals?

This thinking dehumanizes us and others. It hurts us all.

There are plenty of examples

When I first read Donna Karan’s comments, I thought they were self-destructive and hypocritical, given her chosen career. 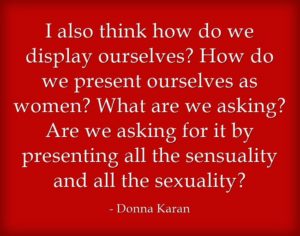 Aside from that, they’re textbook victim-shaming, because she suggests women are responsible for the actions of their harassors. If a woman dresses or presents herself the wrong way, she’s “asking for it.”

No, no, no. Again, harassment is about dominance and power, not sex. (From personal experience, I know you can dress conservatively from head to toe and still be harassed.)

Only Ms. Karan knows what was going through her mind when she spoke those words. Some psychologists suggest people often blame victims so they can feel safe themselves. If that’s the case, we need to rewire our thinking, because it’s faulty. Your neckline or hemline doesn’t give a perp the right to catcall, grab you, or chase you around his office. Nothing gives them a right to do that. A need to assert power and dominance is the cause of such behavior.

Donald Trump’s words have been called “locker room talk.” Despite attempts to 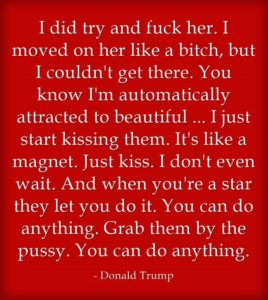 normalize these comments, they are neither normal nor acceptable. They reduce women to sexual objects and admit to harassing behavior. Most important, they insinuate victims are complicit  —  that with celebrity comes the right to grab whatever one wants, and that women desire that attention.

Dismissing this type of rhetoric as “boys-will-be-boys” only compounds the problem. Every writer knows that words have power. Our language reveals our thoughts, and thought is often a precurser to action.  It’s easier to assault someone once you’ve reduced and dehumanized them. History has proved this. The Violence Pyramid shows this clearly.

Many men reject this type of despicable language, despite those who scream otherwise. I’m grateful to know them, and grateful every time I hear a man speak publicly. I’m grateful to all the parents who are teaching their sons and daughters to speak with respect.

We need to find the courage to lift up those women and men brave enough to come forward. Stop blaming victims and stand with them instead. Talk to each other. Engage. If you’re worrying something you say or do will offend, ask. Just ask! Trust me, there isn’t a person alive who won’t appreciate your asking.

If you see a friend harassing someone else, call them on it. When you catch your kid using “locker room talk,” set them straight and show them a better way to communicate. If you see harassment in the workplace, don’t be afraid to talk to the victim. Tell them you’ll support them. It can make all the difference to someone who’s struggling.

"Anxiety happens when you think you have to figure out everything all at once. Breathe. You’re strong. You got this. Take it day by day." ~Karen Salmansohn